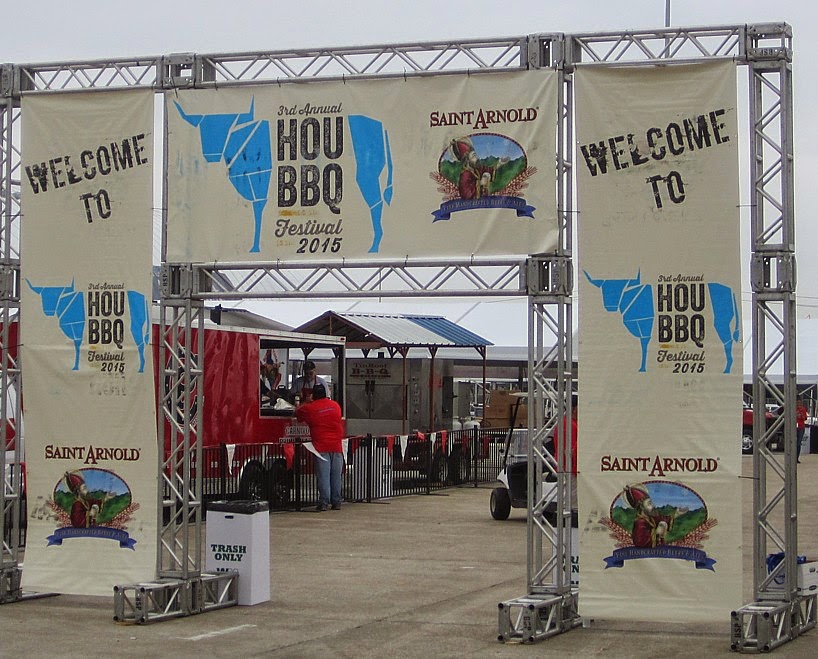 http://houbbq.com/
Three years in a row for us at the Houston BBQ Fest and things seem to be improving on the Houston BBQ scene.  However Lockhart, Taylor, Austin, and even Dallas have far better smoked meats, based on this sample of 23 different joints.  Still it was another fun trip and a day well spent with even better food to be found on our trip down and back.  As usual I fasted the day before, knowing we had 23 joints to sample. 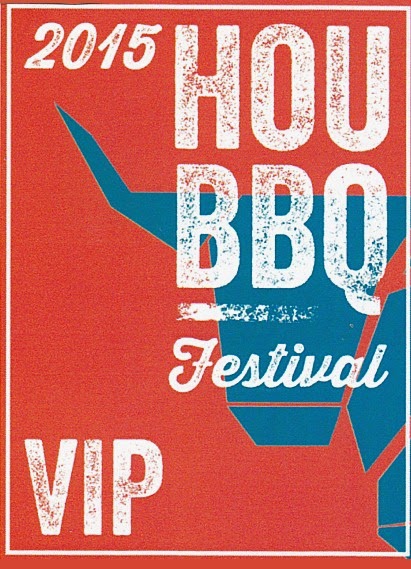 We got out to the fest at about 11 am, an hour before the VIP entry.  Scott and I ended up 11th and 12th in the VIP line.  They were very well organized with volunteers coming out to the line, scanning our tickets, then fetching our goody bags and t-shirts.  Great friendly service.  The weather was a bit steamy but much improved over the gale force winds of 2013 and the occasional downpours of 2014.  There was just enough cloud cover that I never even got out the sunscreen.  It wasn't long til the VIP line snaked far back in the parking lot. 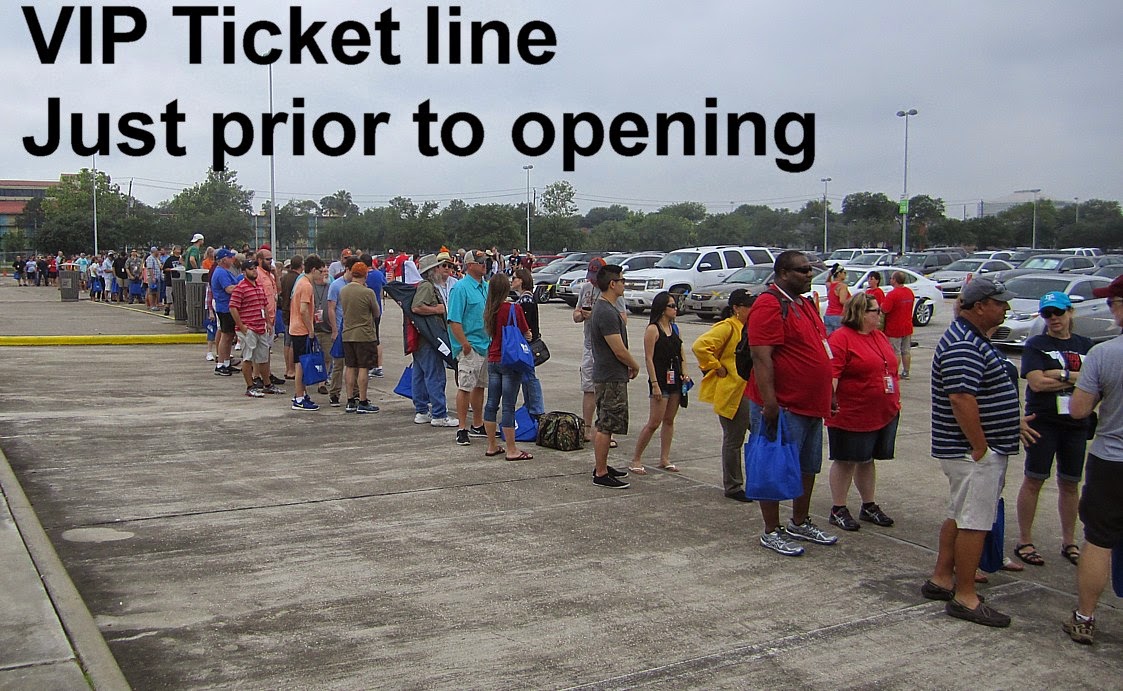 The gates opened for VIP ticket holders right at noon and Scott and I made a beeline for the far side of the festival with a plan of making our way back towards the gate after the hordes had passed.  The plan worked well and most of our samples were acquired with little or no waiting required.  The goal was to sample all 23 joints during the "magic hour" before the general admission crowds descended and the lines got stupid.  We made it in the nick of time and settled in to visit with friends as the general admission ticket holders lined up for their first samples. 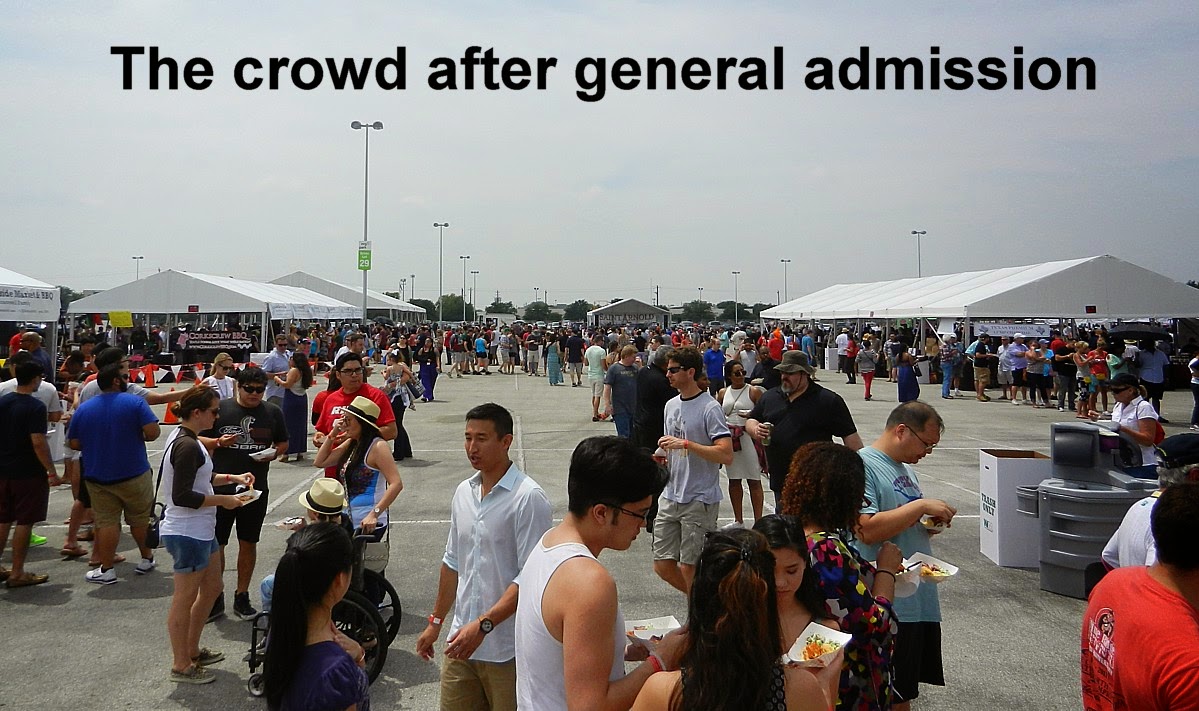 The food this year was generally better than the first two fests.  We did our usual method of taking a bite or two of each sample, then either bagging the rest or tossing it, depending on how much we liked it.  We bagged way more food this year than the first two fests combined.  We still tossed plenty of undercooked or overcooked brisket, tough ribs, and yucky sausage.  As usual the size of the samples varied greatly with some joints passing out tiny morsels while others filled a paper boat with food.  I had only one sample of brisket with discernible smoke flavor.  Louie Mueller's had an excellent beef rib sample and a very nice lamb popsicle.  Kudos also to Feges who went whole hog, the first we have seen at any of the BBQ fests we have attended.  I'm not a big pulled pork fan but it was a nice idea they had to do something different.  Scott noted a number of joints had noticeably small brisket samples and instead pushed pork, turkey, and sides, possibly in response to the high cost of beef.  None of the brisket compared to the small sample I had the day before in Huntsville or the goodness to come in Lockhart.

The only two problems we had with this year's fest were the long beer lines after general admission and the disco music which blared through the speakers during most of the VIP magic hour.  The Texas Monthly Fest does an outstanding job of combining different genres of Texas-made music between bands.  With all the great music that has come out of Houston I'd think it would be easy to compile a similar soundtrack and leave the Michael Jackson stuff alone.  Puhleeessee!!! 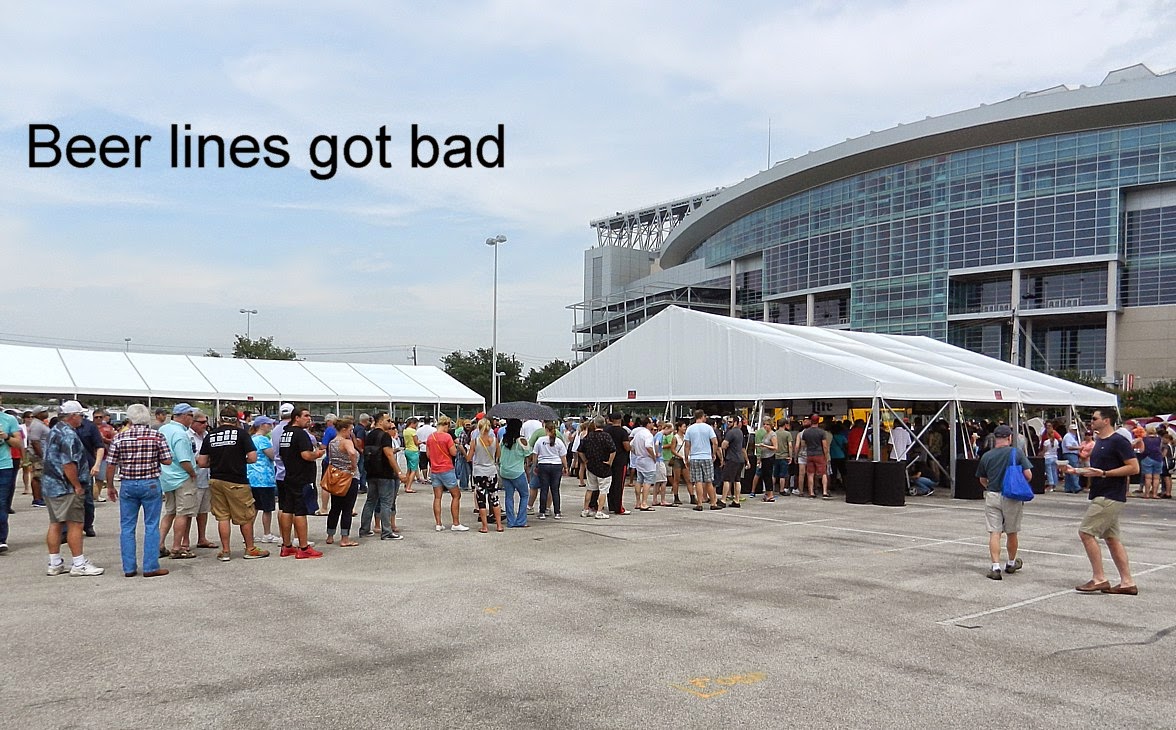 Posts below shows the booths and food samples we tasted.  As usual you can click on any photo for a larger view.
Posted by Don O. at 8:58 PM