https://houbbq.com/
Well I've made it 5 in a row for the Houston BBQ Fest and it just seems to get better every year.  Scott couldn't make it this year but my Mrs tagged along and she said she had a good time, too.  As always we got the VIP tickets.  That extra golden hour before they let in all the general admission folks makes all the difference. 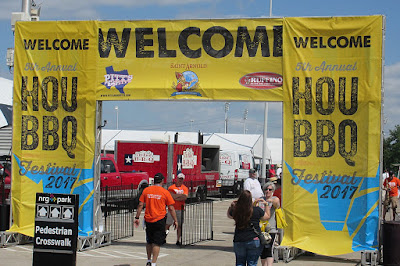 We showed up at NRG about an hour before VIP admission and were about 20th in line.  The weather was wonderful with partly cloudy skies, temperatures in the low 80's, and a light breeze.  Their excellent check-in system was in use again this year with volunteers coming down the line with scanners and handing out the VIP lanyards and goodies.  I wish Texas Monthly would adopt this system.  They had a drink cart pushing up and down the line for anyone who needed to buy a drink.  Once again the goody bag included a small cardboard tray, but we had brought our bigger beer boxes along.  Those are also fun to make. 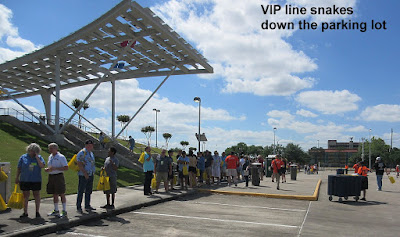 As opening time approached the VIP line stretched down the parking lot and a few general admission folks were lined up in their own cue.  Unlike last year, they opened the VIP gates exactly at noon.  Actually that was probably a smarter move than letting us in early.  Last year when we stampeded in early some of the booths weren't quite ready.  That wasn't a problem this year. 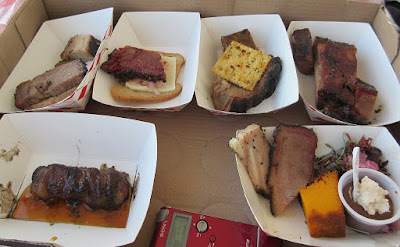 As usual, we headed to the back of the complex where we found Killen's had already formed a line.  We skipped them til later and worked our way down the booths til we filled our boxes with goodness.  Then we headed to a nice eating tent and staked out our spots for the day.   We stuck with our usual method of taking a few bites from each sample, then dropping the leftovers into a big plastic freezer bag.  Then we headed out to gather more goodies and repeated til we hit all 25 joints.  We managed to hit all 25 in the golden hour, but just barely.  Killen's, Gatlin's, and Louie Mueller's were the last 3 spots we sampled as they seemed to have lines right from the start. 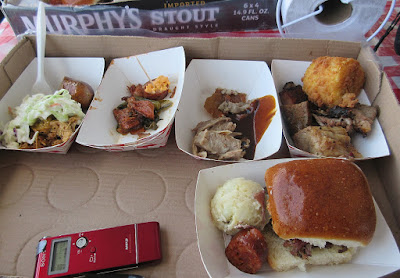 I got sneaky this year and brought along a small voice recorder.  That way I could leave myself audio notes as we hit the different booths.  It worked well and I think I actually got all the food photos credited to the right booths for a change.  If not, let me know. 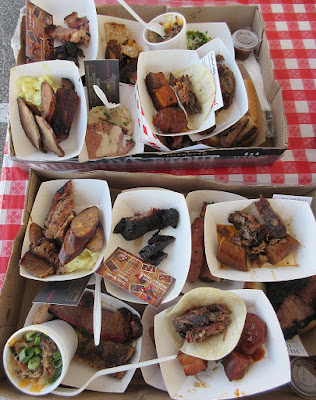 It does get kind of challenging when you're trying to rush through 25 joints, take pictures, and eat, all within just an hour.  There's just so much to see and do!  At one point we had to "double deck" the boxes to get through everything in time.  Fortunately the lines were short on the ones we had skipped earlier as most folks had already sampled those booths. 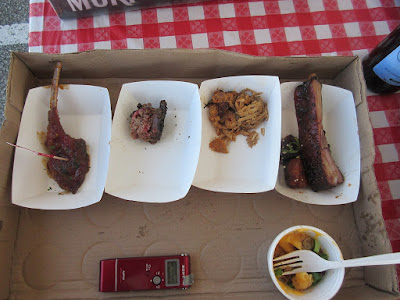 As with all of these fests, there was a wide variety of samples being handed out.  There were a lot more ribs than last year and I consider that a definite plus.  Several booths presented whole hog pulled pork and the evidence was in full display. 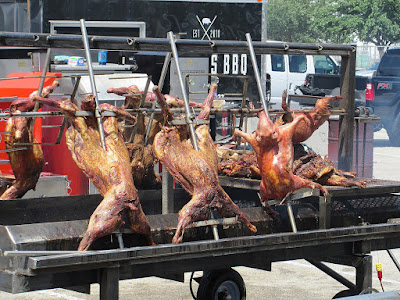 There was a nice variety of items beside the standard brisket, ribs, and sausage.  Candied bacon made a couple of appearances, boudin, bacon wrapped smoked duck, lambsicles, beef ribs, several samples of pork belly, smoked wagyu meatballs, prime rib, and pastrami were just a few of the other meats.  Sides were plentiful as well with mashed potatoes, coleslaw, corn, fried corn on the cob, macaroni and cheese (with shredded brisket), and various breads, crackers, and tortilla/taco combinations. 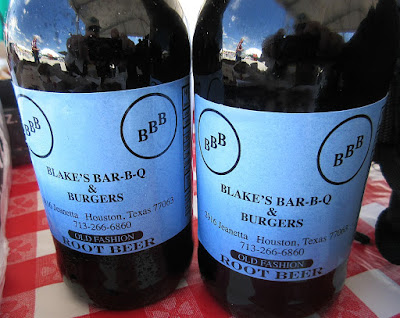 Blake's even brought along their excellent root beer.  I dug that last year and was glad to see it return. 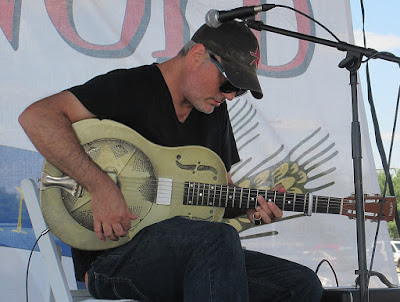 Onstage, John Egan played some blues and slide starting about 1 pm and gained at least one new fan, ME!  I have to admit I enjoyed blues and BBQ more than country and BBQ but that's probably just me. 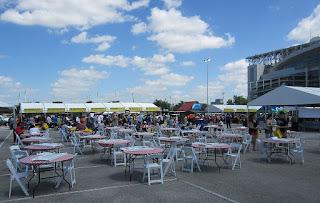 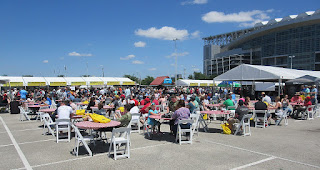 At 1 pm the long line of general admission folks started flowing in and the lines got long. 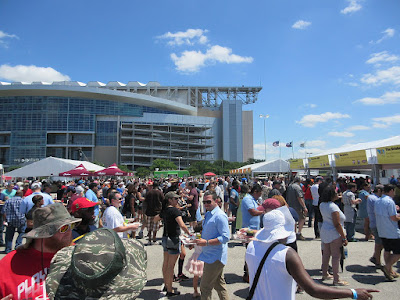 And that's why I always go for the VIP tickets. 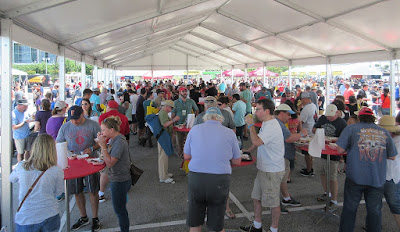 There was a lot of good food this year.  In fact I think it was the best year yet.  The improvement in the Houston BBQ scene over the five years this festival has been going is nothing short of amazing.  I think this fest should get some of the credit for that.  Some of the highlights for me were brisket from Brooks' Place, El Burro and the Bull, The Brisket House, Lenox, Tejas Chocolate Craftory, and Spring Creek.  There was a lot of good sausage, but I thought the spicy turducken sausage from Feges and the spicy sausage from Southern Q stood out.  I didn't have a bad rib all day but Killen's killed it.  In the other meats I thought the bacon wrapped smoked duck was outstanding as was the candied bacon from Brooks' Place.  I could have been very happy revisiting those two lines and stuffing myself with those two goodies.  I also enjoyed the meatball from Tin Roof and the beef rib and lambsicle from Louie Mueller's. 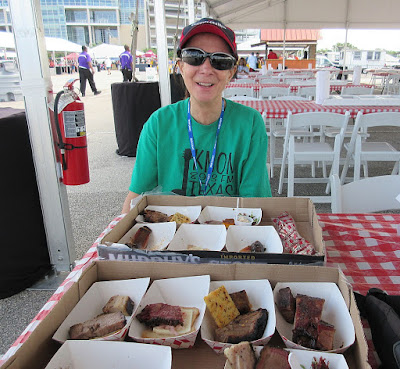 We had a pretty good comparison going in as we had just had brisket, sausage, and beef ribs from Pecan Lodge on Thursday.  Then we had a stop at Black's on the way back.  I asked my wife for her opinions, as a check on my own thoughts.  She is not a hardcore BBQ nut like I am, but she's been to a few fests and eaten some very good BBQ from the best of spots.  First I asked her how this fest stacked up with Red Dirt, Getting Sauced, and the Dallas BBQ Fest, all of which feature top rate joints and all of which she has also attended.  She said Houston was right at the same level.  Then I asked her if she had anything as good as Pecan Lodge at the fest.  She said no, but it was close and she really enjoyed the food.  I was right on board with that opinion. 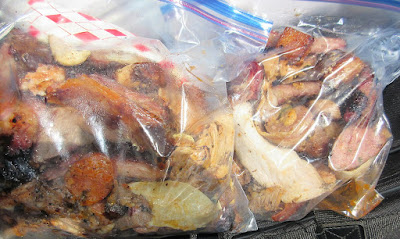 At the end of the fest we had bagged up a lot of great leftovers which we will warm up and enjoy for the next week or so.  It's a lot of food.  I think it would be an interesting experiment for someone to just go through all the booths, collect all the samples, then weigh them.  I'm not volunteering.

Separate posts of food and booth shots will be below.  As always, you can click on any photo for a larger view.
Posted by Don O. at 5:02 PM