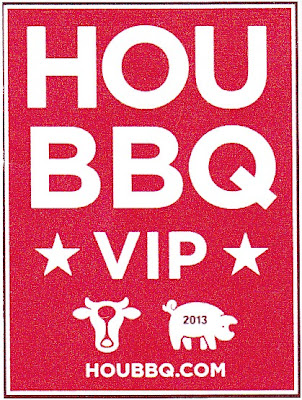 My buddy Mark down in H-Town hipped me to this fest a few months back and I have been looking forward to it ever since.  Scott and I arrived at the site about 45 minutes before the gates opened.  There was a howling north wind and we kept our jackets on all day long.  Check in was easy and we picked up our VIP goodie bags and shirts.  VIP is definitely the way to go on all these kind of events, even with the slightly higher cost.  You get a good head start on the rest of the crowd and can make a good dent in the number of places to be sampled before the lines get real long. 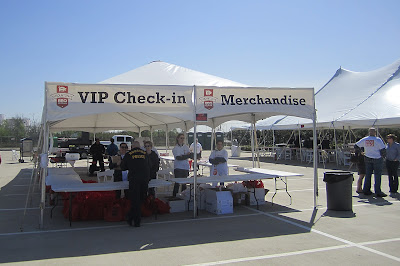 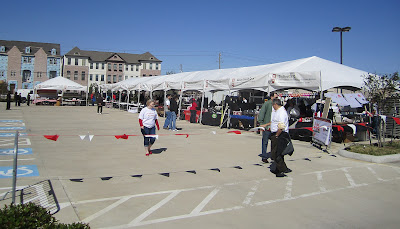 The gates opened just a bit after noon for the VIPs and the food sampling began in earnest.  There were lots of helpful volunteers about and they were needed!  The wind was so strong it was blowing things over, blowing paper towel rolls off the tables, and practically blew my food off the table several times.  They actually had volunteers walking around with the paper towels handing them out to the customers as they approached the seating areas. They also picked up the empty sample trays as you headed back for more.  It was all very convenient. Kudos to the volunteers who made this such a great fest.

There were 15 restaurants represented and it varied a bit as to what you received from each.  Some would have 4 meats plus sides.  Some had just 2 meats.  Some had desserts included.  Most had their own sauce and I was careful to get that on the side, not on the meat.  I managed to sample all 15 spots, finishing up just after the regular ticket holders were admitted at 1 pm.

Most of the brisket and ribs were undercooked and few had any smoke flavor. On brisket I gave kudos to the Brisket House, Blakes, and Gatlins.  All had tender moist brisket with at least some smoke flavor.  On pork ribs I liked Virgies, Gary Burns, Brooks, and Gatlins.  For sausage I loved Ray's, and liked Gary Burns, and Brisket House.  Killen's had a nice beef rib sample, a little bit chewy but with very nice flavor.  Tin Roof had an excellent brownie bite.  Ray's had my new favorite beans anywhere.  I think those were the best beans I have ever had.  Thick baked-style BBQ beans with chunks of their excellent sausage and brisket.  Ray's beans and sausage were the highlight of the whole deal to me.

At 1 pm the crowds descended and the lines got long.  Fortunately I had finished all my eating and spent the rest of the afternoon visiting with friends. 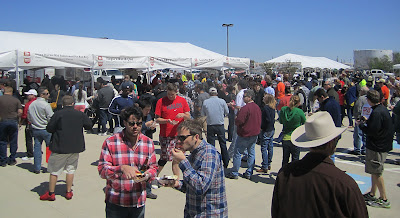 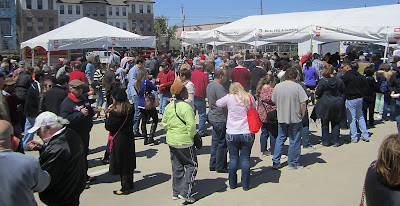 Drew from Man Up had a booth hawking his Q Card and his new Allstar Sauces project.  The next Gettin Sauced will happen September 28th in Austin.  The BBQ Snob, Daniel Vaughn was there with beer coozies and he had his own special badge for the event.  His new book will be out in May. 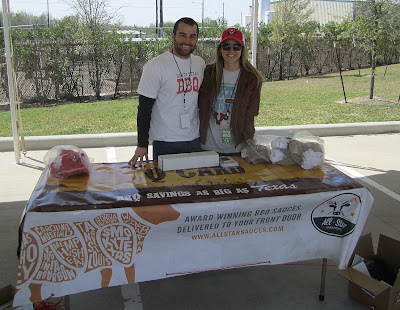 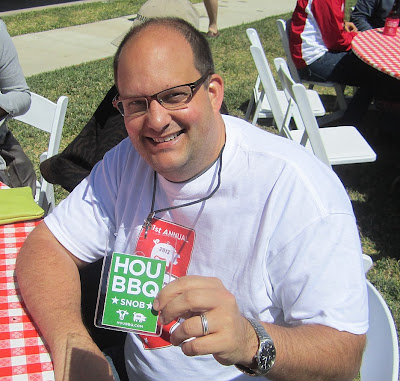 Overall this was a great roadtrip and there are a few spots I would like to check out in Houston as a result.  It would have taken us 4 or 5 days to have a complete meal at all 15 of these joints and this kind of sample fest is a fantastic way to introduce new folks to the Houston BBQ scene.  I hope to be back again next year.
Posted by Don O. at 5:54 PM